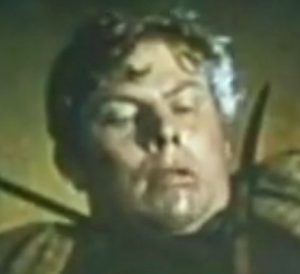 Albert Salmi, a first-generation American born to Finnish immigrants, started life in Brooklyn, New York, on March 11, 1927. Some sources list his birth year as 1928, but 1927 is the date on his memorial plaque. 1927 also fits better mathematically with the generally accepted “graduated from high school, then served in the Army during World War II” timeline attributed to his youth.

Allegedly he caught the acting bug while in the military, so when he was discharged (honorably) he attended the Actors Studio and trained under Lee Strasberg, courtesy of the GI Bill.

By the mid-1950’s, Salmi was finding steady employment in stage and television work. For several years he avoided film work, deciding he did not like it—apparently before he even tried it. Later he accepted his share of movie roles, but it seemed he always maintained his preference for television, especially westerns. If a television show’s characters had penchants for wearing cowboy hats, you would be safe in assuming Salmi had guest starred on it. Over the years, he appeared in over 150 television, stage, and film productions. To list just a small fraction: Route 66, The Twilight Zone, Daniel Boone, Hawaii 5-0, The Virginian (co-starring in one episode with Bobby Buntrock), Gunsmoke, Bonanza, Escape from the Planet of the Apes, Caddyshack, St. Elsewhere, Dallas, and the classic Joan Collins vehicle, Empire of the Ants.

In 1956 Salmi married 24-year-old fellow thespian Peggy Ann Garner, with whom he had been starring in a tour of the play “Bus Stop.” They had one child, Catherine, who died of heart disease when she was 38—young, yes, but she outlived both of her parents. Salmi and Garner divorced in March of 1963. In April of 1964, he married Roberta Pollock Taper. They had two children together, both girls.

In the midst of guest starring on almost every American television show under the sun, Salmi co-starred in the television series Petrocelli from 1974-1976. Also in 1976, he and Taper appeared for a week on the game show Tattletales, where celebrities and their significant others each try to figure out what the other is thinking. It wasn’t was funny as it sounds.

In the mid-1980s, after their youngest daughter graduated from high school, they packed up their bags and moved out of Beverley…Hills, or somewhere in the general vicinity, and moved to Spokane, Washington. Salmi commuted to jobs after that.

Later in his life, Salmi believed his career had taken a downturn, and it apparently made him despondent. (He had at least six acting jobs in 1989, so I don’t know what he was expecting.) He and his wife split up, and he moved out of their Spokane home.

On April 23, 1990, police doing a wellness check found Mrs. Salmi on her kitchen floor, dead from a gunshot wound. Salmi was found in the den, also dead from a gunshot wound. Police determined that Salmi shot his wife with one gun and sometime later used a different weapon to kill himself. It sounds inexcusable until you find out that one of their daughters claims her mother was a horrible, abusive person…so maybe it was self defense? It was later determined that the Salmis died on April 22.

Salmi was cremated, and his cremains reside at Greenwood Memorial Terrace in Spokane, Washington. Allegedly, he was placed in/near the section called “Serenity.” I hope it helps him find some. There is no info available as to whether he is interred near his wife.

If you or someone you know is struggling with depression or addiction, please call the Substance Abuse and Mental Health Administration’s 24/7 National Helpline: 1-800-662-HELP (4357).