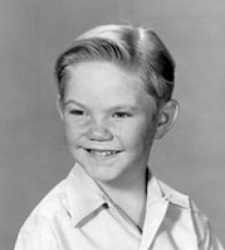 Robert W. [one source claims the W stood for William] Buntrock was born in Denver, Colorado, on August 4, 1952. At age three, he moved with his family to California. Not long after settling in, some of his neighbors decided Buntrock was just-the-cutest-thing-they’d-ever-seen and pressured his parents into getting him an agent. Apparently the neighbors knew what they were talking about, because not too long after his parents secured management for him, Buntrock started scoring television acting jobs. He was best known for playing Harold Baxter, the towheaded tyke on the television show Hazel, a sitcom whose reruns are probably airing on televisions somewhere in the world at this very moment. Thanks to the magic of independent television networks, a show and actor that might have otherwise been lost to the ages both live on through syndication.

Besides the gig on Hazel, he played a dozen other bit parts, including a turn on The Donna Reed Show episode “Mary’s Little Lambs,” which also featured another short-lived actor, Karyn Kupcinet. The first of his three appearances on the western The Virginian saw him acting alongside Albert Salmi.

In 1967, after his third Virginian appearance, he “retired,” ostensibly to return to the life of a “regular kid.” Sometime after that, Buntrock moved with his family (which now included younger sister Stella) to South Dakota, and in 1970 he joined the National Guard.

On the evening of April 7, 1974, he was on his way to visit a friend and had to drive over what’s been described as a “Y-shaped” bridge. The bridge had been damaged by some major flooding in 1972 and had been under construction for two years, yet it was lacking safety barriers, signs, or anything else alerting drivers to the fact that between the two lanes of the bridge there was a gaping hole large enough for someone to drive a full-size car into. Buntrock was the unlucky driver who did. Most reports say that rescue crews were called quickly but did not arrive in time. Let’s face it, even if help had arrived in 5 minutes, his odds of survival still would have been just about nil. The diver who went on the “rescue” mission said that Buntrock tried to get out, but the sides of the hole blocked him from getting the car door open more than 4 inches or so. That’s the stuff nightmares are made of. If he had had one of those window-breaking hammer-type devices, he might have been able to break out the back window and escape. (That’s a subtle hint to everyone who does not have one of those in their cars.)

Shirley Booth, who had played Hazel, was reportedly distraught when she heard the news, as she and Buntrock had grown close over the course of the show.

Rumors have persisted for years that Buntrock’s mother perished in an accident on the same bridge a year or two before his death. It’s an interesting urban legend, although completely untrue. She did die two years before he did, but she died at home from cardiac arrest.

There are no verified photos of an adult Buntrock floating around cyberspace, but it has been said that he looked very much like his youthful self, so perhaps everyone can just use their imaginations. Maybe if you squint a little…?

Bobby Buntrock is buried in Mountain View Cemetery (also known as Keystone Cemetery) in South Dakota, which is touted as the only cemetery in the world with a view of Mount Rushmore. I personally don’t see how that would be an effective selling point, but you never know what will appeal to some people.

Side note of questionable interest: Buntrock shares his current digs with prospector David N. Swanzey, the man who bestowed the name Mount Rushmore upon that particular pile of rock (he named it after one of his buddies, New York City lawyer Charles Rushmore, for whatever reason). I’d bet cash money that if he had known how famous it was to become, he would have gone with Mount Swanzey.

Swanzey’s only other act of note was marrying the now-much-more-well-known-than-him Carrie Ingalls of Little House on the Prairie fame (her character on the show was the one with hardly any lines of dialogue). Carrie Ingalls Swanzey was not buried near her husband, but is interred in South Dakota’s De Smet Cemetery, along with Pa, Ma, Mary, and Grace (Grace was the character on the show with virtually no lines of dialogue at all). For those with inquiring minds: Laura, her husband, Alonzo, and their daughter, Rose, are interred in Mansfield Cemetery in Mansfield, Missouri. Her son, who died in infancy, is spending eternity alongside his grandparents and aunts in De Smet.