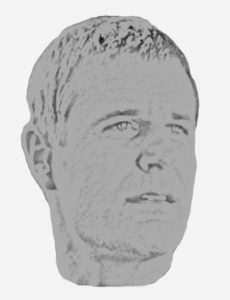 Charles Rocket was born Charles Adams Claverie on August 24, 1949, in Bangor, Maine. During and shortly after his college years at the Rhode Island School of Design, he tried his hand at several artistic endeavors, including music and short film making. He was also a news anchor at several television stations around the country (Rhode Island, Colorado, and Tennessee). Around this time, he married his college sweetheart, and they had a son.

In 1980, he got his big break by being selected as a cast member for Saturday Night Live. He got a lot of airtime, including the anchor slot for the show’s weekly long-running (forever-running?) Weekend Update segment. Granted, that season was a dismal one, but at least it was national exposure for him. That ended abruptly when Rocket (allegedly unintentionally) dropped an f-bomb on live television. Justice was swift and harsh. Soon after, he was fired from the show, along with the producer. Within a month, most of the rest of the cast had been axed, as well.

After SNL, Rocket bounced back nicely and secured a steady stream of guest starring and recurring roles in sitcoms and dramas, as well as roles in many movies. His credits include Dances with Wolves, Earth Girls are Easy, Touched by an Angel, Law and Order: Criminal Intent, and Murder, She Wrote.

In 2003, Rocket and his wife bought a farmhouse in rural Canterbury, Connecticut. It was a fixer-upper, and Rocket did most of the fixing up himself.

On October 7, 2005, Rocket went out for a walk and never came back. The following morning, his wife found him with his throat slashed. The medical examiner performed an autopsy and declared his death a suicide.

If you or someone you know is struggling with depression or addiction, please call the Substance Abuse and Mental Health Administration’s 24/7 National Helpline: 1-800-662-HELP (4357).