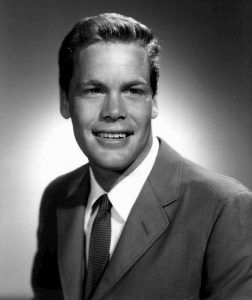 Doug McClure was born in Glendale, California on May 11, 1935. Not much is reported about him besides his acting credits, of which there are many. His first screen role was portraying a soldier—a tiny, uncredited part in Friendly Persuasion, a 1956 movie starring Gary Cooper, Dorothy McGuire, and more than 100 other actors. McClure went on to portray many other military men, as well as doctors, gamblers, law enforcement officials, cowboys, and just regular guys. His longest-lasting role was Trampas on the western television series The Virginian.

Modern television watchers are probably most aware of him because of The Simpsons’ character Troy McClure, whose name is a shout-out by Simpsons producers to McClure and fellow 1960’s actor heartthrob Troy Donahue.

McClure was apparently an incurable romantic, because he married five times. He had two daughters, one of whom also went into the acting profession. She even had a small part in one episode of The Virginian.

Sometime around 1993, McClure was diagnosed with lung cancer. He continued to act while he fought the disease. He lost his health battle on February 5, 1995, at the age of 59. His last few television appearances were aired after his death.