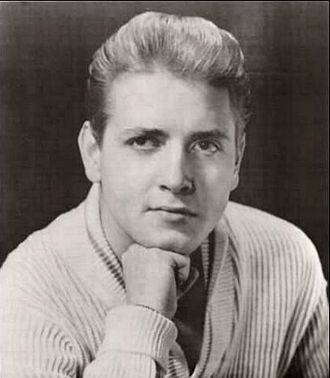 Edward Raymond Cochran was born on October 3, 1938, in Albert Lea, Minnesota, (that even sounds cold, doesn’t it?) to former Oklahomans Alice and Frank R. Cochran. Some sources put the Ray/Raymond in his name before the Edward/Eddie, but I couldn’t find any definitive evidence about which order is correct. Throughout his life he chose to go by ‘Eddie,’ so that’s what I’m going with.

Sometime around 1952, he moved with his family to sunny and warm Bel Gardens, California.

A fan of music from an early age, Cochran learned guitar, bass, and drums. Throughout his teens he partnered with various other amateur musicians, making both self-made and professional recordings. One of them was a 1955 tune called “Live Fast, Love Hard, Die Young.” Eerie, huh? None of these recordings went anywhere, so Eddie ended up putting out a solo recording (“Skinny Jim” and “Half Loved”) in July 1956. That recording didn’t go anywhere, either, but it might have served to get him noticed by the right people: just a few weeks later, the producer of the half-morbidly fascinating, half-forgettable movie The Girl Can’t Help It (starring Marilyn Monroe wannabe Jayne Mansfield as an aspiring singer), hired Cochran to do an Elvis Presley-esque performance of “Twenty Flight Rock” (co-written by Cochran) for the film. You can find it on the ‘net. “Twenty Flight Rock” was the song that aspiring Beatle Paul McCartney performed in an Eddie Cochran-esque style as an audition for John Lennon (allegedly—I’m still awaiting confirmation from Sir Paul himself.)

Because of his movie appearance—or maybe in spite of it—Cochran was signed to a Liberty Records recording contract. His first Liberty release, 1957’s “Sittin’ in the Balcony,” made it to a respectable #18 on the Billboard charts. Also in 1957, Cochran appeared in another movie, Untamed Youth, starring Jayne Mansfield wannabe Mamie Van Doren as law-breaking vagrant who gets sentenced to a rock ‘n’ roll prison farm. This can also be found on the internet. I know, because I watched it. The things I do in the name of research.

The following year, Cochran co-wrote and released his highest charting (#8) single “Summertime Blues.” This song has been covered by everyone from Bruce Springsteen to Alvin and the Chipmunks. Eddie claimed that, courtesy of the magic of overdubbing, he played the guitar, bass, and drums heard on the track, as well as contributing all of the vocals. That claim has been disputed. Also released in 1958 was another of Cochran’s most popular songs, “C’mon, Everybody.”

In early 1959—February 3rd, to be exact—Cochran was shocked by the plane-crash deaths of two of his good friends, singers Buddy Holly (22) and Ritchie Valens (17), along with the oldster of the group, singer J. P. Richardson, also known as “The Big Bopper” (28). Cochran started obsessing over his own mortality and wanted to stop touring in favor of doing only studio work. Unfortunately for him, studio work alone wouldn’t pay the bills, so he had to keep on keepin’ on. He continued to record, including the emotional song “Three Stars,” written as a tribute to Holly, Valens, and Richardson. Later in 1959, he appeared in Hal Roach Studios’ movie Go, Johnny, Go! This movie also featured Ritchie Valens in his only movie appearance.

Because of aforementioned financial issues, Cochran accepted an offer to tour with Gene Vincent throughout Great Britain from January through mid-April 1960. (Rumors have it that George Harrison caught one of the Liverpool shows, and a 12-year-old Marc Bolan carried Cochran’s guitar from or to his car, to or from a London venue.) The good news is, Cochran and Vincent completed the tour, which was hugely successful. Now on to the bad news.

After their final scheduled gig of the tour, a Saturday, April 16th show at the Bristol Hippodrome (which is still in business), they hired a cream-colored 1960 model Ford Consul Mark II sedan(=saloon in Great Britain) to transport them to London, where they were scheduled to take a plane from London Airport (renamed Heathrow in 1966) back to the U.S. the following day. Besides Cochran and Vincent, passengers included 20-year-old Sharon Sheeley (Eddie Cochran’s fiancée, who wrote, among other songs, Ricky Nelson’s #1 song “Poor Little Fool”), and 29-year-old stand-in tour manager Patrick Tompkins. The driver was 19-year-old George Martin (probably no relation to “the fifth Beatle” of the same name).

These days, the trip from Bristol to London can be made in about two hours using the M4 motorway. The M4 wasn’t completed in 1960, so the trip then would have taken considerably longer then and required them to travel via a fair number of local roads, including the A4 through Chippinham. It was on that road, at around 11:50 p.m. along the Rowden Hill stretch, where the driver lost control and hit/sideswiped a streetlight pole/lamp standard. While the driver (Martin) and the front-seat passenger (Tompkins) were able to walk away from the crash, the three backseat passengers fared worse. Sheeley suffered minor injuries and shock, and Vincent received a fractured collarbone and several injuries to his legs, which had already been seriously damaged in a 1955 car crash. Cochran, reportedly ejected from the car, suffered a traumatic brain injury. The crash occurred practically in front of the Chippenham Community Hospital, and that’s where the car’s occupants were taken. After assessment, they were transported to St Martin’s Hospital in Bath, about 15 miles away.

The next afternoon at 4:10, Eddie Cochran passed away. His body was flown home, and a funeral service was held for him on April 25. Among the mourners was Conception Valens, Ritchie Valens’s mother, who had sat through her own son’s funeral less than 15 months earlier. Afterward, Cochran was interred at Forest Lawn Memorial Park in Cypress, California. His plot is right near Lincoln Avenue, so he’s still close to where the action is.

An investigation into the incident concluded that the cause of the crash was excessive speed and driver error. An investigator noticed a 50-yard skid line leading up to the creamed car. The road was dry and the sky was clear. The driver was not impaired by alcohol or drugs. Nothing fell, ran, or bounced into the roadway. There were no pavement imperfections or moving vehicles in the vicinity to cause a driver to lose control of his/her car. A few of the passengers (the ones that could still speak) reported that the driver had been driving fast. Tompkins, who had been in the front seat, said that the driver had taken a wrong turn and had just turned around to correct his mistake.

Martin was ultimately convicted of dangerous driving was fined £50 (about £1,000 in 2020 dollars) or 6 months imprisonment. He went to prison. (I don’t know about anyone else, but if I were in that situation I would be willing to eat bugs for 10¢ a pop, or something as else equally unpleasant, until I earned the cash). Martin was also banned from driving for 15 years, but that was lifted in 1968. A judge reversed the decree because Martin “had suffered considerable financial hardship.” Apparently, his other income-making skills were even more lacking than his driving abilities.

At my count, there are at least 10 stone and/or metal memorials erected to Cochran’s memory in the US and England.

In 1987, Cochran was inducted into the Rock and Roll Hall of Fame.