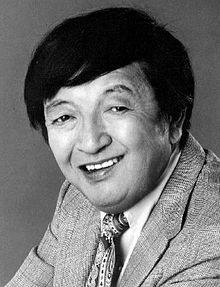 On October 28, 1917, Goro Suzuki (later to be known as the world-famous Jack Soo) was born on a ship in the middle of the Pacific Ocean. His parents—Oakland, California, residents—had decided their child should be born in Japan, but they didn’t quite make it there in time.

Sometime after he arrived, the family made their way back to Oakland, where Soo grew up. He attended University of California Berkley and earned some cash by emceeing and performing stand-up comedy at various comedy clubs in the area.

Not too long after graduation, Soo’s show business career plans were derailed courtesy of the U.S. government. Shortly after the U.S. officially entered the fray of World War II, Soo and his family—along with thousands of other Japanese Americans—were interned at Tanforan Assembly Center in San Francisco and then relocated to Topaz Relocation Center, Utah.

Despite this indignity, Soo made the best of his circumstances, spending much of his time there entertaining his fellow inmates. Eventually he was officially deemed harmless and received authorization from the U.S. government to leave the center. Proving he was not one to hold a grudge, Soo later accepted a job in military intelligence in Cleveland, Ohio.

After the war, Soo traveled all over the country performing in nightclubs and the like, including an 18-month stint in Chicago, partnering in an act with Joey Bishop. Fortunately, all that work did not keep him too busy to marry former model Jan Zdelar in 1945.

During a performance in San Francisco, Soo was spotted by Gene Kelly (yes, that Gene Kelly), who was scouting for Asian actors to perform in the premiere Broadway production of “Flower Drum Song,” which Kelly was directing. Kelly offered him the nightclub announcer role, allegedly with one (big) string attached—he had to change his last name to something that sounded more Chinese than Japanese, since the “Flower Drum Song” was written about Chinese characters. Exit Goro Suzuki, enter Jack Soo. Soo was well received and was soon promoted to the lead role in the play. He reprised the role in the 1961 movie, as well as several live tours and revivals.

In 1965 Soo was signed by Motown Records (yes, that Motown Records) and recorded a pre-Stevie Wonder, ballad-y rendition of “For Once in My Life.” Soo’s version never got released, and the rest is history.

When the “Flower Drum Song” jobs dwindled, Soo and his family moved to Hollywood, and he managed to find steady work in an Asian role-light entertainment industry. Besides guest spots on television shows such as The Odd Couple, Hawaii 5-0, and M*A*S*H, he played the secondary male lead for a year on a Tony Franciosa-led show, Valentine’s Day. His most memorable role was probably sardonic, jaded, and hysterically funny Detective Sergeant Nick Yemana on the sitcom Barney Miller, a character he played from 1975-1978. Soo raised deadpan to a fine art form.

Soo was diagnosed with esophageal cancer in the fall of 1978 and passed away from the disease on January 11, 1979, leaving behind his wife, three children, and thousands of saddened fans. In a very classy move, several months after his death the Barney Miller team paid tribute to him by running a retrospective episode about Soo and his character.