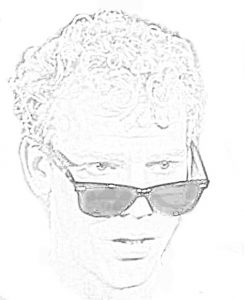 Merritt R. Butrick was born on September 3, 1959, in Gainesville, Florida. Sometime in his youth, he and his parents (he was an only child) moved to the San Francisco Bay area of California, and Butrick graduated from Tamalpais High School (located in Mill Valley, CA) in 1977. After high school, he enrolled in the California Institute of the Arts (CIA). Allegedly he was booted out because some of his instructors decided he had no talent. If that’s true, then the joke was on them. In 1981, Butrick landed a role on Hill Street Blues, an immensely popular television series in those days. That same year, he also appeared in an episode of CHiPs (another immensely popular television series of the day) and the made-for-television movie Splendor in the Grass. In 1982, he appeared in the movie Zapped! and played one of the lead characters (Johnny Slash, a Valley Boy-philosopher hybrid) in a new television situation comedy series, Square Pegs (starring Sarah Jessica Parker). Sadly for its actors and fans alike, SP only ran for one season. Also in 1982, he played David Marcus, son of James T. Kirk, in a little feature film called Star Trek II: The Wrath of Khan, which grossed over $80,000,000. Not bad for a young guy deemed talentless by so-called experts. For the next few years, he acted in theater and continued to garner several film/television acting gigs per year, including reprising his role as David Marcus in 1984’s Star Trek III: The Search for Spock. He also appeared in one episode (in 1988) of Star Trek: The Next Generation. His last role was in the made-for-television movie From the Dead of the Night, a zombie-type flick with a surprisingly decent cast. As for the film’s quality, I can’t speak to that.

Sometime in the late 1980’s, Butrick contracted AIDS. By early 1989, he developed toxoplasmosis and pneumonia, and he passed away on March 17, 1989. He was cremated, and his remains were given to his family.

Although he was only able to work a modest number of years, his appearance in the Star Trek franchise productions assures him celebrity immortality.