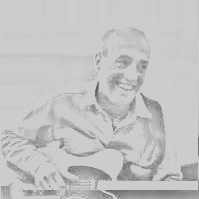 Michael Richard Gee was born at 13 Garth Street, Cardiff, Wales, on July 3, 1944. Various sources claim the date was December 31, 1943 or July 4, 1944, but Gee’s brother Tom says it was July 3, 1944, so those other sources are WRONG. Gee, who went by the name Micky (he preferred the ‘e’-free spelling, also according to his brother), developed a love for music at an early age. While still a youth, Gee’s uncle taught him the basics of how to play the guitar, and Gee filled in the rest by studying the guitar tracks on the records he liked and teaching himself how to emulate what he heard. He particularly loved the guitar-rich rock and roll/rockabilly music of the American south, by artists Elvis Presley, Carl Perkins, Chet Atkins, Merle Travis, and the like.

At the age of 18, Gee made the gutsy move to relocate to America. After making pilgrimages to the music meccas of Nashville and Memphis (hoping to meet some of his guitar heroes, but he didn’t find any), he made his way to New York, where he found a dishwashing job and an apartment in the Bronx. He was having the time of his life until he found out the hard way that having a U.S.-issued work visa made a guy eligible to receive a U.S.-issued draft notice. Back in Wales, Gee joined a band called the Senators, whose lead singer was a then-unknown Tom Jones. Tom Jones didn’t even know he was Tom Jones back then, going by then moniker Tommy Scott at the time.

Gee stayed with the group through many gigs (including opening for the Rolling Stones) and several name changes, all courtesy of their manager, Gordon Mills. Mills was also a songwriter of some note. At around this time, he was commissioned to write a song for chart-topping singer Sandie Shaw. With writing partner Les Reed, Mills co-wrote a song they titled “It’s Not Unusual.” Tom Jones was called upon to make a demo of the song so Shaw and her team could listen to it in all its resounding glory. According to the story, Shaw heard Jones’s rendition and said she couldn’t top it. She suggested that Jones record it for real, which was exactly what happened. However…Mills decided that the combination of Jones’s fabulous voice and Mills’s fabulous song didn’t need an official band backing them, so the musicians were kicked to the curb (figuratively speaking), and Jones became a solo act. Granted, it worked for him. Whether it worked for the dismissed band is up for debate. (Legend—and Wikipedia—has it that Jimmy Page, pre-Led Zepplin fame, might have been the studio musician who played lead guitar on the final recording.) So…Gee just missed the opportunity to work with Jones during Jones’s earliest brush with the #1 spot on the charts.

Quickly bouncing back from his unceremonious firing, Gee joined Joe Cocker’s Grease Band. The Gee-Grease union didn’t last too long, and while he worked on an arrangement with Cocker for the song “With a Little Help from My Friends,” he departed the band before the song was recorded. So…Gee just missed the opportunity to work with Cocker during Cocker’s earliest brush with the #1 spot on the charts.

From the Grease Band, Gee teamed up with Dave Edmunds. Starting in the late 1960’s, the two collaborated on many projects, including Edmunds’s 1970 cover of the song “I Hear You Knockin’,” for which Gee played lead guitar in the official recording. So…Gee got the opportunity to work with Edmunds during Edmunds’s earliest brush with the #1 spot on the charts. Finally! (If you remember the unique guitar intro to “IHYK,” that was all Gee.)

Gee continued to work regularly with Edmunds, including touring with him—a lot—in the U.S. (He was safe—the U.S. draft had ended by then.) Over the years he also worked, and played, with many big names in the music industry, including Shakin’ Stevens, Geraint Watkins, Andy Fairweather Low, Phil Everly, Cliff Richard, Bill Wyman’s Willie and the Poor Boys, Nick Lowe, Charlie Watts, Jimmy Page, Carl Perkins, George Harrison, Eric Clapton, Mark Knopfler, Ringo Starr, and others too numerous to mention. He also loved to play in his local clubs with whichever bands had the stage the nights he was there. By all accounts, Gee was a quiet and self-effacing guy and universally respected and liked, both personally and professionally. He could also sing well, too, but preferred to do that just for fun.
It has also been reported by more than one source that Gee provided the soundtrack of the movie Twin Town, but there is absolutely no confirming information available to the public. Maybe he saw what a train wreck (reportedly) the movie ended up being and asked to have his name removed from the project.

Gee spent the last part of his life doing the job he loved and spending time with people he loved, or at least liked. Not bad work, if you can get it.

In the late 2000’s, Gee started having breathing issues and was diagnosed with emphysema. He worked almost to the end, and died on January 21, 2009, at Cardiff’s University Hospital of Wales (the same hospital Lena Zavaroni had died in almost 20 years earlier). Gee is interred at Cardiff Crematorium and Thornhill Cemetery.

Fortunately, many of Gee’s musical moments live on through the internet. His brother Tom has a YouTube channel dedicated to Micky’s recorded performances. One can also find other Gee performances here and there on the ‘web, including “Blue Suede Shoes: A Rockabilly Session,” where he plays alongside Perkins, Harrison, Edmunds, Clapton, and others. It’s well worth a watch—or a hundred—if you’re a music lover.