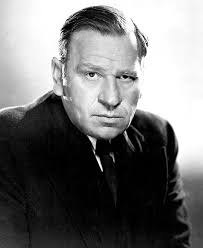 Wallace Fitzgerald Beery was born in Clay County, Missouri, on April Fool’s Day, 1885. Some reports say his family was living in Kansas City at the time, while others say they were living in a rural area and moved to the city when he was young. Unless someone is planning on making a pilgrimage to his birthplace, the exact location probably doesn’t matter much any more.

Restless from a young age, Beery ran away from home twice before he reached the age of majority. The second time, at age 16, he left to join the circus, so now we know where that cliché came from. There, he snagged every youth’s dream job, the coveted position of elephant trainer’s assistant (insert your own joke here). He stayed with the circus for a couple of years, but quit after being scratched by a leopard.

Beery then moved to New York City, where his older brother Noah was already an established stage performer. Beery the younger found employment easily, landing jobs in the theater, comic opera, and summer stock. He remained in New York for almost 10 years, and then, after a brief stopover in Chicago, ended up in California in 1915. Both in Chicago and southern California, he worked in an Essanay Studios’ movie series in which he played the main character, “Sweedie,” a female maid. While filming one of these movies (probably Sweedie Goes to College), he met actress Gloria Swanson, and the two married on March 27, 1916—Swanson’s 17th birthday, and four days before Beery turned 31 (all together now: “What was she thinking?”). Allegedly, their 3-year marriage was chock full of all sorts of horrendous behavior on Beery’s part, including beatings, all types of assaults, and an occasion when he supposedly provided a pregnant Swanson with a drink that, unbeknownst to her, was known to cause fetal death—and it did.

Evidence of his brutish behavior being either unseen or overlooked by most of the Hollywood moguls and moviegoers alike, Beery successfully made the switch from silent movies to talkies and worked steadily for decades, appearing in dozens of big-budget films. At one point, he was the highest-paid actor in the world. (Allegedly, to assure this he insisted his contract stipulate that he get paid $1.00 more than the next-highest-paid actor(s) at his studio, Metro-Goldwyn-Mayer, also known as MGM.)

In 1924 Beery married again (the lucky lady being Rita Gilman), and wife #2 managed to put up with him until 1939. During the marriage, they adopted Carol Ann, the young daughter of his wife’s cousin. Shortly after the marriage ended, Beery adopted another child, a seven-month old girl. This was publicized at the time as being a gallant gesture on his part to help a down-and-out single mother. After the initial hoopla, the little girl was never seen/heard/spoken of again in relation to Beery. Best-case scenario: it was just a poorly conceived publicity stunt dreamed up by a misguided studio p. r. guy (perhaps to soften Beery’s image post-divorce), and no mother actually abandoned her child to the care of a violent drunk who was known to hate and resent all of his adolescent co-stars. [Exhibit A: Margaret O’Brien, who acted with Beery in 1946’s Bad Basomb, said that when she worked with him, he would pinch her. A lot. Exhibit B: Jackie Cooper, Beery’s co-star in 1931’s The Champ (a role that sort of earned Beery an Academy Award for Best Actor) said that the moment the cameras stopped rolling, Beery would completely ignore him as if he did not exist. Exhibit C: Mickey Rooney—who worked with Beery in 1935 (Ah, Wilderness!), 1937 (Slave Ship), and 1938 (Stablemates), and always claimed to like Beery—said that while shooting a scene for the movie Slave Ship, Beery once slapped him so hard, Rooney was knocked to the floor.]

Regarding Beery’s Best Actor Oscar “win,” he actually came in second place to Frederic March (who played the titular roles in Dr. Jekyll and Mr. Hyde) by one vote. At the time, Academy rules stipulated that any vote tally separated by three or fewer votes would be considered a tie. Poor old Alfred Lunt, the third and only other Best Actor nominee in the running that year, went home empty-handed. The movie Lunt starred in, The Guardsman, was said to be a stinker, so he probably wasn’t too surprised.

It has also been rumored that in mid-December of 1937, Beery was involved in an assault on comedian/actor Ted Healy, a beating so vicious it led to Healy’s death one to three days later, depending on which report you believe. (Healy was best known for putting together that genteel and erudite troupe, the Three Stooges.) Also allegedly involved were Albert “Cubby” Broccoli, who went on to produce some of the James Bond movies, and Broccoli’s cousin, Pat DiCicco (formerly Mr. Thelma Todd), who went on to marry Gloria Vanderbilt. Stories regarding the beating vary; some sources say Beery was the chief participant, others say he was the lead egger-on. Still others claim he wasn’t even there, and his name only became attached to the drama because it sounded exactly like something people expected he would have done. Adding fuel to the speculation of his involvement was the rumor that just a day or two after the incident, Beery and family left for Europe to start a hastily arranged month-long vacation. Allegedly, there was much fanfare and press coverage surrounding their departure, but I was unable to find any corroborating evidence of it. Evidence disputing the vacation story includes reports that Beery was in the middle of filming a movie in California at the time, and that both he and his wife were seen making public appearances in southern California in late December/early January. There was also no hard evidence that Beery had anything to do with the crime, and he was never charged with anything in connection with the assault. However… many people believed Beery was indeed involved in the incident, but that MGM, the studio he was working for at the time, sent out their “fixers” to do whatever they needed to in order to make it go away. Back in the day, studio fixers were very busy guys. Healy’s official cause of death was listed on his death certificate as alcoholism, but fixers were not afraid to have friendly chats with coroners, so who knows what the real story is? After all this time, we’ll probably never know for sure.

In the 1940’s, Beery’s career eventually waned. He continued to work, but appeared in only a movie or two a year, compared to four or more per year in his heyday.

There are two stories about what Beery’s final curtain call was like. The more sensational one claims that in April of 1949 Beery was returning to the U.S. from Europe aboard the HMS Queen Mary when he suffered a heart attack and died in his cabin. At the time, the ship’s bigwigs didn’t want that particular incident attached to that carefully crafted image they created for their their cruise ship, so they had someone carry his body into New York City and leave him in a hotel room. I’m not sure how one would carry a full grown man’s dead body through New York and a hotel lobby without being noticed, but I guess other people are craftier than I am. (In retrospect, if the story is true and the ship officials had known how popular the liner would become as a “haunted destination,” they probably would have mentioned his on-board death in their cruise brochures.)

Second death story (more boring and more likely): as reported in the Los Angeles Times, on April 15, 1949, Beery suffered a heart attack and died in his Beverly Hills, California, home at 816 North Alpine Drive. (It appears the house either no longer exists or it’s been renumbered.) The official story is that his ex Rita Gilman, their adopted daughter, Carol Ann, and his nephew, Noah Beery, Jr., were all by his side when he died, but I suspect that’s yet another p. r. tale invented by the studio. He seemed like the kind of guy destined to die alone.

There might not be anyone left who knows for sure where Wallace Beery started out, but plenty of us know for sure where he ended up: Forest Lawn Memorial Park in Glendale, California (Vale of Memory section, Lot 2086).