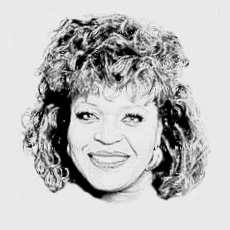 —Alaina Reed (birth name Bernice Ruth Reed) was born in Springfield, Ohio, on November 10, 1946. After high school, she moved up the road a piece to Kent and attended Kent State University, acting and singing her way through a host of school-produced plays and musicals. From there, she moved to one of these places: Chicago,  Philadelphia, New York. In whichever order, she ended up acting in stage productions in all three cities.

In 1976 Reed got her first big break by being cast in Sesame Street as Gordon’s younger sister, Olivia. It was a recurring role she held until 1988. In 1985 she made her film debut, unsurprisingly, in Sesame Street Presents Follow That Bird. (I saw it a looong time ago. I think I thought it was cute.) Hall became a dual-coaster that year when she was hired to star in California-filmed television sitcom 227. (She played the nice one.) Reed jetted from New York to Los Angeles and back to meet the production schedules of both shows. 227 ended in 1990, and Reed managed to escape the curse of stereotyping and continued to have a respectable career guest starring on television shows and appearing in the occasional movie.

Somewhere along the line, Reed reportedly married and divorced a ne’er-do-well, with whom she had two children. In 1988, she went for someone completely different and married 7’ 2 ½” actor and all-around nice guy Kevin Peter Hall, whom she met when he guest starred on 227. Mr. Hall contracted AIDS from a blood transfusion—needed because of injuries received in a serious car crash—and he died on April 10, 1991.

Reed was diagnosed with breast cancer in late 2007/early 2008. Rumor has it that she was in negotiations to reprise her Sesame Street role, but talks were postponed while she underwent treatment.

She married Afghan American Tamim Amini in 2008. Reed passed away from cancer on December 17, 2009, leaving behind her husband and her two children.

Reed was cremated and her ashes were scattered at sea.