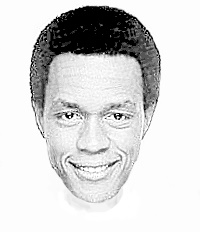 Kevin Peter Hall was born on May 9, 1955. He grew up (and up and up and up) in Pittsburgh, Pennsylvania. In high school he was a standout basketball player, partly because he reached the height of 6’ 9” (2.0574 m) by the time he finished his junior year. (His mother, father, and five brothers all surpassed 6’ (1.8288 m) in height.) When he finally finished growing, Hall topped them all at 7’ 2 ½” (2.1971 m). After high school, Hall attended George Washington University and studied Theatrical Arts. Unsurprisingly, he was also a member of their basketball team. Upon graduation, he accepted a job playing professional basketball in Venezuela.

Sometime during his first year playing pro ball, he rethought his career choice. After the season ended, he headed back to the U.S. and settled down in Hollywood to try his hand at acting. While he was looking for his first role, he and a friend co-produced nightclub acts, and finally, in 1979 Hall broke into the film biz. His first three roles were as the characters “Mutant Bear,” “The Alien,” and “Gorvil,” which indicated in which direction his career was headed. Hall didn’t mind, though, using the opportunities to improve his acting skills and give each character a sense of reality.

Soon he was being cast in “real people” roles, including guest spots on Night Court and The Dukes of Hazzard, and a starring role on the television series Misfits of Science. He continued to get creature-type parts as well, including Harry of Harry and the Hendersons and The Predator in Predator. Mixing things up a bit, he also guested on Star Trek: The Next Generation as a human-creature hybrid.

In 1988 he earned a (person) role on the show 227. While working on the set, he met actress Alaina Reed, who played regular series character Rose Holloway. The two began dating and were married on December 29, 1988.

He was making good strides in his career and personal life when he was injured in a car crash in 1990. His injuries necessitated him getting a blood transfusion, and he subsequently learned he had contracted the AIDS virus from it. Hall died from the disease on April 10, 1991. He was cremated and his ashes were given to his wife. His survivors also include two stepchildren.

Hall seemed to be a kind, thoughtful man. Instead of getting angry because he wasn’t getting the kind of roles he wanted, he felt gratitude for getting decent acting jobs that allowed him to work in the industry of his choice. Then he worked hard to perfect his craft and prove his value as an actor, all while maintaining his maturity and dignity (which must not have been easy sometimes when dressed up as a yeti or a giant goo-spewing extraterrestrial insect). It is sad that such a fine role model and example of humanity had to die so soon after he arrived on earth—but it has been my experience that when it comes to extraordinary people, that is often the case.